How student papers are adopting the ‘Humans of…’ page 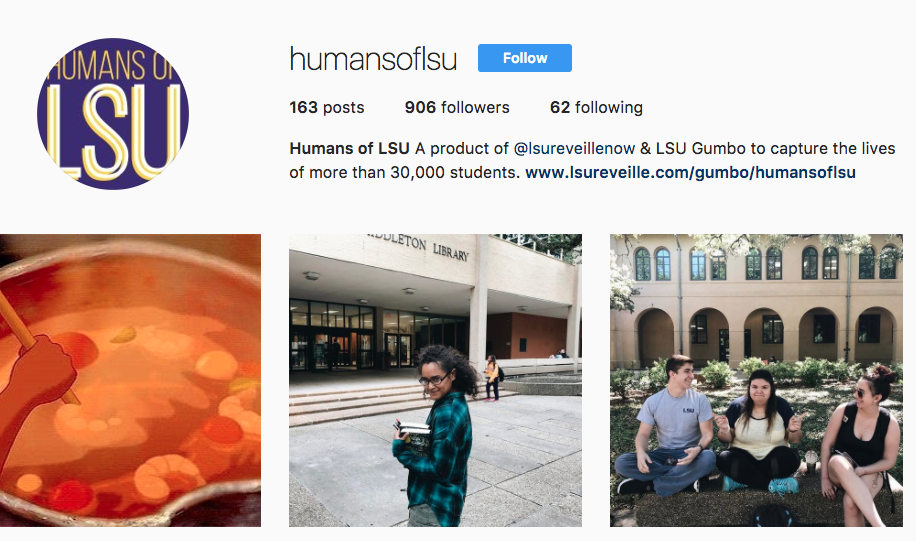 You may have searched Facebook to see if there were a Brandon Stanton-inspired page for your own college, logging the anonymous stories of your college home’s “humans.” If you’re on the staff of your student paper, you may have even considered starting a “Humans” project of your own. These pages have a natural human interest appeal, with goals not limited to:

In fact, these were three goals cited by each of the four students I interviewed who have run their own “Humans of…” projects. If you’re interested in harnessing these goals for your own student paper, yearbook, or blog, then prepare to be inspired. Here’s how four college “Humans” page runners have worked with student media to make their “Humans” community alive and thriving.

Jeremy Berkowitz never worked on the staff of The Daily Targum. He started Humans of Rutgers University (HORU) at the end of his freshman year, undecided in major and lacking a camera. By the end of his senior year, his page had reached over 11K followers and he discovered a passion for photojournalism.

HORU steadily gained enough popularity to attract the attention of The Targum’s reporters for a story. In early 2016, Berkowitz profiled members of The Daily Targum’s staff during the week of an administrative referendum to remove all or part of the paper’s funding. Soon after, The Targum reached out to see if he’d be interested in letting them host his project in a tab on their website. The partnership became official that September.

Berkowitz retained his independence and was never technically part of the paper’s staff. Now that he’s graduated, The Daily Targum will adopt and continue the project under their staff umbrella. Berkowitz put together a guide detailing his method so that there is as much continuity as possible.

“No more red tape… now it can flourish in a journalistic setting,” he said.

The Facebook page is heavily modeled after Humans of NY (HONY): anonymous, paragraph-long quotes paired with a nameless face. His goal and hope for the page has been “finding unity in diversity to help the community:” bringing people together on the diverse Rutgers campus. One of the greatest successes he’s seen is the “sheer number” of community members who appreciated and followed the page.

“More than some well-known campus organizations,” Berkowitz said. “That was really uplifting.”

Berkowitz believes the format is adaptable.

“You don’t have to always call it ‘Humans of,’” he said. “The point is to share stories that aren’t told… The more we’re sharing about each other, the more we share about ourselves, the more we connect, and understand each other.”

As Student Life Editor at The Equinox, Emma Hamilton oversees the weekly “Humans of KSC ” feature in their print copy and on their website.

The Equinox’s photo editor Jacob Paquin does the groundwork of interviewing people and taking their photos. Each week is centered around a different question like, “As you leave the nest, what is one piece of advice you would give to underclassmen students?” or “What makes you smile?”

Like HONY, the faces in those photos are never named, a fun component which Hamilton says “breaks up the traditional news parts of it.” While readers featured in The Equinox might be turned off by lengthy interviews or negative coverage, Humans of KSC lets students participate stress free.

“It’s a fun way to get students involved with being in the media,” Hamilton said. “Humans is fun, people want to be a part of it.”

Students at KSC can view Humans of KSC in a quarter-page of the print copy and on their website. Hamilton would like to see any social media outreach function as a traffic driver back to print and digital outlets.

“I would say my goal is to have more recognition of it on campus,” Hamilton said. “Get students talking, get them involved.. have people enjoy it.”

Mikayla Shoup is a Features section writer at The Lumberjack, where several writers rotate to write a weekly “Humans of NAU” article featuring between four or five humans. The Humans series has been ongoing for about a year and isn’t the only Features section series; its sibling is “Insights into the Past,” which spotlights events that day in history.

The theme of each “Humans of NAU” article coincides with the theme of the paper that week. The final 2016–17 post for the graduation issue featured solely seniors.

“We go around to and come up to people like, ‘hey!’” said Shoup. “It took a few hours to find eight seniors.”

Unlike HONY, more robust information about the interview subjects is given with each photo, including their name and year/position. Humans of NAU posts on Facebook generally perform better compared to other content posts. Shoup attributes this to the “human interest” element and the diversity.

“The goal, I think, is to be as diverse as possible,” said Shoup. “Talk to a variety of people, about all different issues… People enjoy reading human interest stories and like to be interviewed.”

In Louisiana State’s student media, “Humans of LSU” is under the umbrella of the yearbook, Gumbo. The feature started in 2014 with two Gumbo staffers who have since graduated. Humans of LSU is now a regularly-updated feature that goes out on Facebook and Instagram throughout the year and is compiled in a “Best Of Humans” section in the physical copy of the yearbook.

Because the page is relatively new, reporters are still free to make of it what they like. Marlie Lynch and Taylor Gonsoulin, Gumbo co-editors, hire two Humans reporters and pay them per post. They’ve been hiring younger editors to ensure the continuity and nurturance of the page.

“It’s still like a baby, and we’re still trying to find the best way to raise it,” said Gonsoulin.

For the print copy, one hope is to incorporate layered videos with Aurasma, where app holders scan a photo with their phone and watch a live video message play.

“The point is to establish community,” Lynch said. “Everyone has their own story… We go to a really diverse school, so we want to tell everyone’s story on campus.”

The page has already seen a 300–400 percent increase in followers on Instagram and Facebook in the last two years. Their goal is to have one post per day in 2017–18. Lynch says getting the word out is a matter of organic networking.